Back to Articles | « Previous | Next »
Home » You Asked, We Answered: Some Burning Climate Questions

You Asked, We Answered: Some Burning Climate Questions 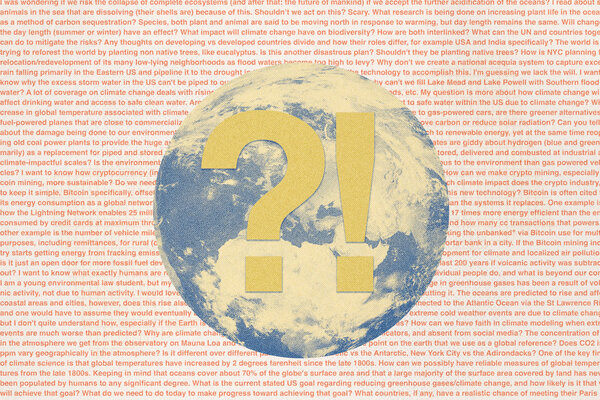 You Asked, We Answered: Some Burning Climate Questions

Reporters from the Climate Desk gathered reader questions and are here to help explain some frequent puzzlers.

What’s one thing you want to know about climate change? We asked, and hundreds of you responded.

The topic, like the planet, is vast. Overwhelming. Complex. But there’s no more important time to understand what is happening and what can be done about it.

The connection between climate change and extreme cold weather involves the polar jet stream in the Northern Hemisphere, strong winds that blow around the globe from west to east at an altitude of 5 to 9 miles. The jet stream naturally shifts north and south, and when it shifts south, it brings frigid Arctic air with it.

A separate wind system, called the polar vortex, forms a ring around the North Pole. When the vortex is temporarily disrupted — sometimes stretched or elongated, and other times broken into pieces — the jet stream tends to take one of those southward shifts. And research “suggests these disruptions to the vortex are happening more often in connection with a rapidly warming, melting Arctic, which we know is a clear symptom of climate change,” said Jennifer A. Francis, a senior scientist at the Woodwell Climate Research Center.

How will climate change affect biodiversity?

What impact will climate change have on biodiversity? How are they interlinked? How do the roles of developing versus developed countries differ, for example the United States and India? — A reader in India

Warmer oceans are killing corals. Rising sea levels threaten the beaches that sea turtles need for nesting, and hotter temperatures are causing more females to be born. Changing seasons are increasingly out of step with the conditions species have evolved to depend on.

And then there are the polar bears, long a symbol of what could be lost in a warming world.

Reporters from the Climate Desk gathered reader questions and are here to help explain some frequent puzzlers.

Copyrights of the Climate News articles belong to the respective Media Channels.
This Climate News portal is non-profit and politically non-dependent forwarding readers to The Current Global Climate News